When you loved being a police officer like I did, being forced to leave the job is like having your legs chopped from underneath you.

When you loved being a police officer like I did, being forced to leave the job is like having your legs chopped from underneath you. In 1989 I was retired because of ill health and at 41 it felt like I was thrown on the scrap heap.

As one of four driving instructors for Leicestershire police force, I was a specialist in my field. I became a special constable in 1968 before joining the regulars a year later. My chief inspector saw the potential in me and made me the first ever probationer in Leicestershire to join the traffic division. It was a job I absolutely loved. It was hard at times, certainly when you were dealing with fatal road traffic collisions, but you met so many nice people.

In 1978 I became a driving instructor for the force. My role ranged from teaching officers to drive a large van carrying 12 passengers, to training drivers for high-speed jobs. Safety was always paramount. I’d come home sometimes absolutely shattered, but getting the best out of someone on the course gave me great satisfaction. 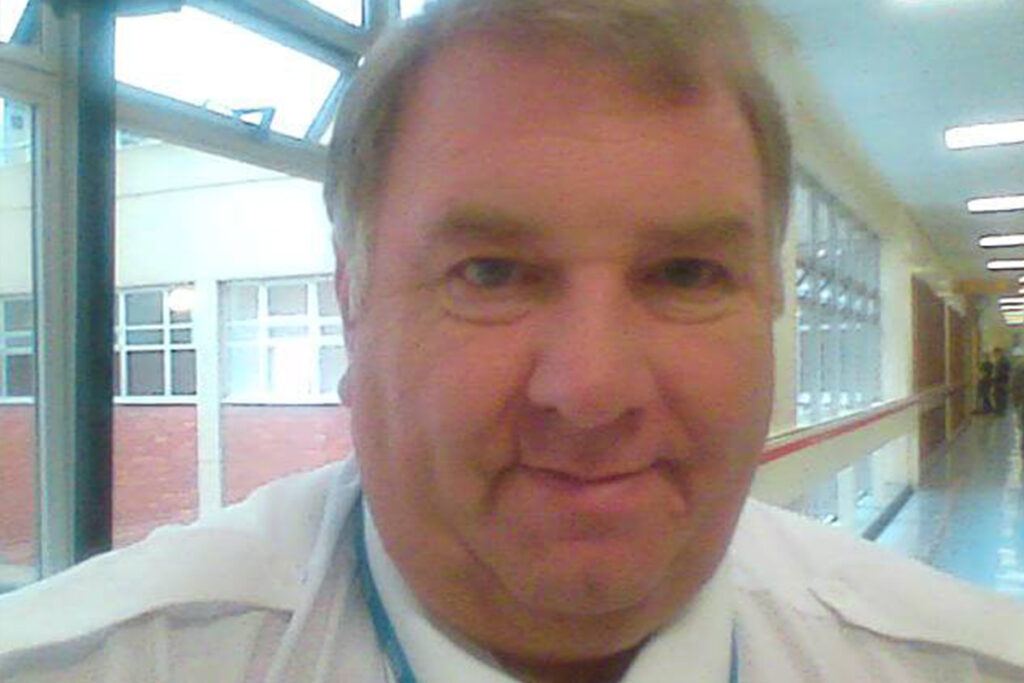 After lessons, we used to drop off local drivers to their various stations. One afternoon in September 1988 I was returning an officer back to Melton Mowbury. I was coming back via the A46 when we came across what turned out to be a double fatal accident. One car had gone off the road and wrapped itself around a tree. When I found the driver, a lady, she was already dead, but there was a baby still alive in the backseat. Despite my best attempts, I couldn’t get to it so I went back to radio for help.

There was a small hedge by the side of the road, only a foot high. On the way back to the car I stepped over it, not realising that hidden behind it was a six-foot ditch. When you fall that far you don’t feel anything to start with apart from knowing you’ve lost your footing. My whole body concertinaed down and I remember feeling this searing, sharp pain from my feet right to the top of my head.

Because of the incident, I knew I had to get out and as a typical policeman, you put other people before yourself. A lorry driver had stopped by this point and helped me out of the ditch.

I got on to the radio and called for assistance but by the time the ambulance showed up, I knew something was seriously wrong with me. In ambulances, they have a chart of the body and a female paramedic attending the scene asked me to point to where it hurt.

‘Literally from my heels to the top of my head,’ I said.

She then drew a line from the feet of the chart all the way to the skull and wrote: ‘Everywhere in between.’

I then drove back to the force driving school to write a report. When fatal incidents like that happen you’re in a state of shock. You’re not thinking about yourself, your mind is on the relatives of the victim, the dead person you just saw.

The next day, the pain in my back was immense. It felt as though my upper body, neck and head were welded together. I went to my GP who referred me to a specialist for some x-rays. It was then I learned that along with an injury to my arm I’d actually broken my c-3 vertebrae.

I was told to go home, lie flat on the floor and not move unless it was absolutely necessary. That’s what my next 12 months looked like. I’d hear about tragedies that would happen and because of the police officer in me I’d want to get up and help, but I couldn’t.

The force police surgeon regularly checked up on me and in 1989, because of the seriousness of my injury, he and my consultant decided that I was unfit for duty so I was retired out on ill health.

I got good support from senior officers and colleagues who came to see me regularly, but knowing that I couldn’t do my police or instruction job was crushing. To have to stop in one fell swoop was awful.

I became depressed and soon began having suicidal thoughts. My injuries affected my home, my relationships and my day-to-day life. I just didn’t want to be here anymore. Friends kept in close contact and tried to get me back to normality, but it didn’t work for a long time.

Thoughts of suicide were there all the time. When you can’t do what you want, to not even be able to do shirt buttons up, is debilitating. I developed arthritis in my ankles, knees and hips, which my consultant believes was from the fall. The L7 and L8 vertebrae in my spine have been compressed and so I now have sciatica. Even today, I’m on morphine patches and take 19 tablets a day.

I first heard about the Police Care UK at a local NARPO meeting. Most policemen are the sort of guys that don’t want charity, but I made a few enquiries and registered.

Because of my injury, I need a taller car so that I don’t have to twist my head or neck to get in or out. The charity helped me with the deposit I needed for a new vehicle that was suitable and could also carry my mobility scooter.

Because of my injuries and arthritis, I got to a point where it couldn’t get up the 9-inch step into the house. So Police Care UK had my driveway completely altered so that if I ever went out or came in I wasn’t frightened of tripping. Recently, they had my bathroom changed into an accessible wet room.

These changes have changed my life. I’m not a prisoner in my own home anymore. Now I can go out, I can meet up with friends, I can socialise. I feel relieved now that I’m not suicidal. You get bad periods and good days, but now those good days are now a pleasure.

Knowing that there was someone out there who could help me when I needed it was life-changing. I want other officers suffering like I did to know that there is a light at the end of the tunnel. People will listen to you.

Without Police Care UK, I wouldn’t be here today. Do not be too proud to ask for help, they changed my life.

I realised I was paralysed. I couldn’t feel my legs. That was when it became abundantly clear that something serious had happened.

Debbie’s story   Throughout the year, our wonderful supporters take on all sorts of challenges to raise money to assist our work. Some are police officers or police staff; others are related to or are friends with members of the police family. Some just want to show they value those who protect and serve their […]